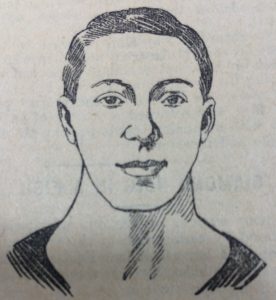 John Campbell joined Partick Thistle from Govan team Linthouse during the summer of 1894 where he met another new signing, John Wilkie. The two would go on to forge a partnership which would see them team up for a number of different clubs. The two youngsters were selected as Thistle’s left wing for the first game of the season, a league match against Dundee Wanderers, and Thistle won the game 5-2 with a goal from Campbell helping the score. Campbell was virtually ever present in his first senior season, playing 34 games and scoring eleven times.

In 1895-96 he was again a regular in the team but was without a regular partner as Wilkie had moved to Blackburn Rovers, and at the end of the season he was tempted to join his old mate in Lancashire. John Proudfoot also joined Rovers during that season. Campbell and Wilkie played for three seasons at Blackburn before both players signed for Rangers. Apart from a spell with West Ham United Campbell spent five years at Ibrox, helping the dominant Rangers team of the time win four league championships, before signing for Hibernian in 1903 where he played regularly for three further seasons (with a short spell with New Brompton).

John also had an international career for Scotland, playing four times. His first game was against Wales at Wrexham in 1899 where he scored Scotland’s first and third goals from the right wing in a 6-0 win. He was quickly re-selected for the remaining games against Ireland (two goals in a 9-1 win) and England (no goals in a 1-2 defeat) that season. Two seasons later he again played against Ireland (playing beside his namesake John Campbell of Celtic), again scoring two in an 11-0 rout. Six goals in four games isn’t a bad scoring record.

He also played for the Scottish League against England, scoring the only goal in a 1-4 defeat.

In 1906 Campbell, having recently married, returned to Thistle (described in the Edinburgh Evening News as ‘his first love’) from Hibs to the delight of the home supporters, and he played a further season for Thistle, again as a regular, playing either wide on the right or the left.

Contrary to some reports John Campbell left Thistle in 1907, joining Bo’ness and then Dumbarton Harp, before retiring in 1910 and beginning a career as a ship’s steward.

The Scottish Weekly Record, in 1903, interviewed Hibernian’s new signing, and his reminiscences of his time at Thistle are interesting.

When I was sixteen years of age I played my first senior cup tie – a Scottish Second Eleven one – for Linthouse against Queen’s Park Strollers.

After than I got no peace from some of my friends until I consented to appear in the ranks of Partick Thistle. I rather liked those two seasons at Partick, and alongside suck brilliant players as “Willie” Paul, Freebairn, and Wilkie I gained much useful knowledge.

Wilkie and I were like brothers. We were constantly solicited by people who represented English clubs to try a season or two in the South, and at length we followed the example of many other Scottish footballers, and joined Blackburn Rovers.

In 1905 the Weekly Record published a profile of John Campbell.

Few players have had greater experience of football in Scotland and England than John Campbell, now of the Edinburgh Hibernians. Campbell began his senior career with Partick Thistle, where he had as his companion John Wilkie, the two being associated with each other for a number of years after.

Campbell, after a term of service with the Partick team, crossed the Border. There he played with Blackburn Rovers, afterwards returning to the Rangers, with whom he probably did his best service. Campbell again went back to England, where he played with West Ham, and since his return has playe with the Easter Road team.

Campbell is a versatile player, and can take his place in any position in the forward rank. He has been honoured on several occasions, having played for the association against England in 1899; against Wales and Ireland in the same year; and against the latter country in 1901. He was also capped by the League against England in 1898. 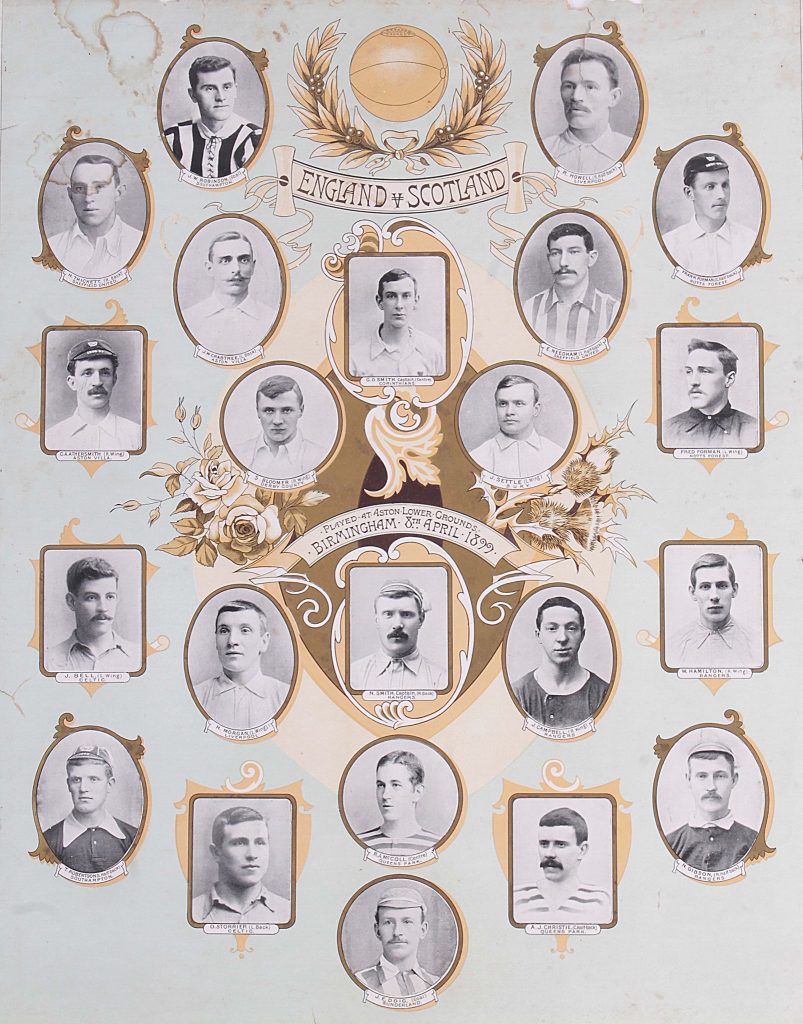 Poster from the England v Scotland match in 1899. Image via footballcollectorsitems.com