Recently Thistle fan Paul4Jags decided to jog a route around all the sites of Partick Thistle’s old grounds, starting at Overnewton and ending at Firhill, a route of 13 kilometres.

Paul recorded his run at his entertaining blog.

A team goup photograph from the 1952-53 season has recently been discovered. 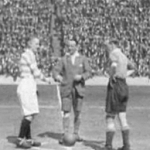 View film of the 1925 Junior Cup Final played at Firhill.