“Partick Thistle have a new ground. The old one was an eyesore to the public, and worse to the players. The new field will beone of the best in the country. It is situated in Dumbarton Road, it is being used as a strawberry field at present.” Scottish Athletic Journal

The new ground was part of an estate known as Muir Park and was overlooked by a private zoo known as the Monkey House which had been opened in 1881 and operated by Glasgow waxworks owner Mr McLeod. The zoo stood to the north of the football ground, presumably towards Gardner Street, and was part of a public recreation ground known as the Partick Tea Gardens. In 1908 the Daily Record reported that “On Cup day the football ground accomodated a human menagerie that dwarfed for noise the animal collection further along”. At the time of writing (2011) a bistro situated in Gardner Street was called ‘The Tea Garden’.

Muir Park was opened with a game against Glasgow Thistle. The Partick Brass Band played before the game and at half-time for the large gathering of supporters. Fittingly, Partick Thistle won the game 9-0.

Despite the optimism at the start of the season, poor weather soon created problems with the state of the pitch. The field collected much of the water from the surrounding high ground. The club were unhappy at the prospect of having having to spend money on the pitch without first having a lease on the ground, but after a series of poor games due to the pitch, the sum of £30 was spent to drain the field. The players and club felt that they were not doing themselves justice on the old pitch.

The following season, 1884-85, saw Thistle spend a considerable amount to keep the ground in good order for the start of the season, as the SFA Annual gave the following details “Grounds, private, Muir Park, Partick (in centre of town), cars pass every two minutes. Dressing room on grounds.” Notices had been erected at Muir Park, banning swearing.

Having spent money on the ground, the fear that Thistle had been living with, not having a lease, became reality. The grounds that Muir Park stood on were sold, to a Mr Ino Gairdner, and the search was on for a ground for the following season.

In an interview in the Scottish Weekly Record (1 October 1904) the then secretary Andrew Smith expressed his regret that the club was unable to purchase the Muir Park. “I often think what a splendid investment the purchase of Muir Park would have been for the club. It was sold at an exceptionally low figure for building purposes.”

The ground was situated alongside Partick Bowling Club in Hamilton Crescent, and opposite the bottom end of West of Scotland Cricket Club’s ground, facing Partick Town Hall (now the Partick Burgh Hall). Just three months after the last game at Muir Park, the Scottish Athletic Journal reported that the pitch was being already used for building purposes. The site is curently occupied by flats, between Hamilton Crescent and Gardner Street (presumably named after Ino Gairdner). The photo shows the site from Gardner Street, showing Muirpark Street and the flats. 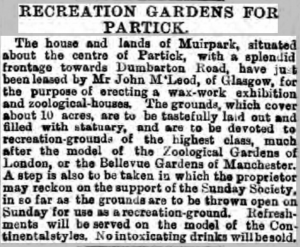 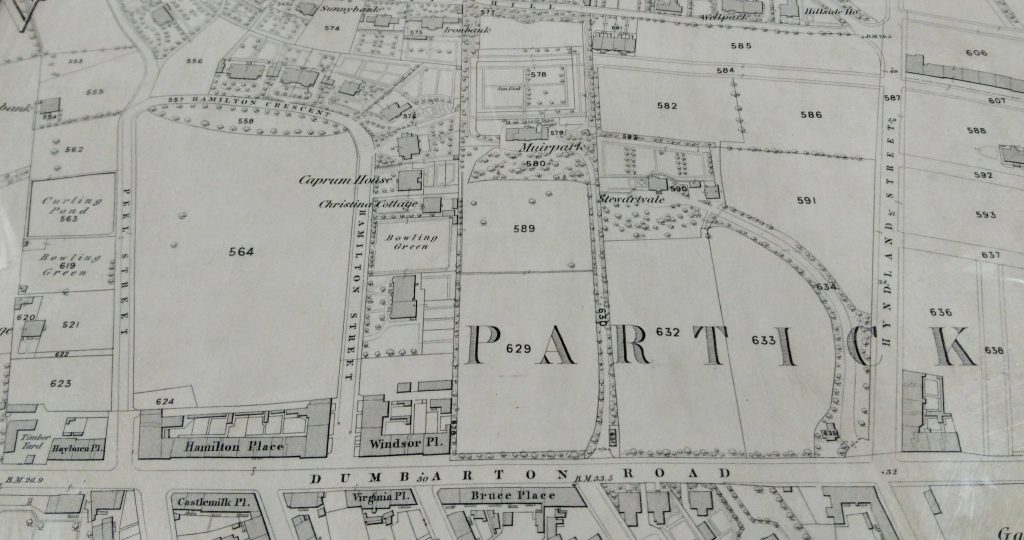