Marcella – the footballer’s cigar Preview of the 1905-06 season

The Partick Thistle yacht and the America’s Cup

In April 1887 the mysterious contents of the specially built shed at the Henderson shipyard at Meadowside in Partick was revealed. The newly launched boat was the British entrant in the America’s Cup which was to take place in New York in September. It was a racing vessel of a modern style with incredibly strong structure to bear the weight and power of its sails. Great secrecy had surrounded the building of the yacht, which was named Thistle, to try to gain an advantage over the American team – only a small trusted team of boatbuilders had been permitted access to the shed prior to the launch. 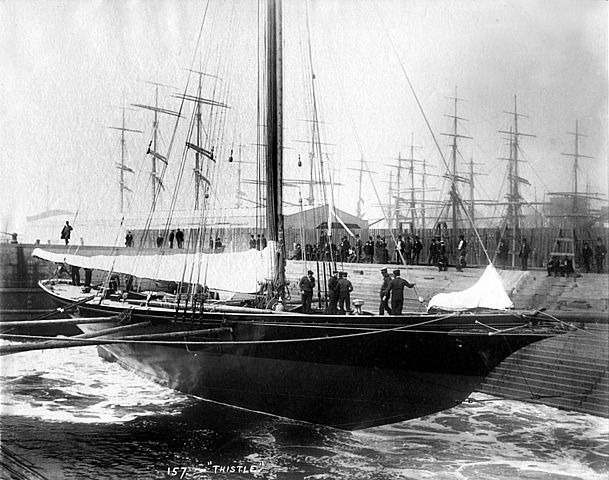 Thistle in drydock at Meadowside, as photographed by John S. Johnston.

Thistle sailed to New York as the challenger in the 1887 America’s Cup against the US defender, Volunteer. Skippered by John Barr, she lost both Cup races, and returned to Scotland in September 1887.