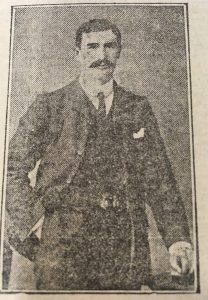 Tall and straight-backed, blond with a handlebar moustache, Sam Kennedy looked every inch the late Victorian/early Edwardian gentleman. However, Sam was a plumber and he came from Girvan, and was a battering-ram centre-forward for Partick Thistle.

Sam joined Partick Thistle in August 1902; from Ayr, where he was regarded as the best centre-forward in Division 2. He played for the probables in the pre-season trial match at Meadowside, impressing enough to replace the previous season’s main striker Alex McAllister in the opening league game. The Ayrshire boy faced Kilmarnock in his first game in the big league and had a great game, scoring the equaliser, and then setting up William Massie for the winner as Thistle won 2-1.

This win augured well for the rest of the season, and thanks to Sam’s 14 goals and partnerships with Massie and Robert Gray, meant that Thistle finished the season in their highest ever league position – eighth.

Sam was an individual type of player. When the fashions of the time dictated that the centre-forward should be a pivot for the rest of his team, receiving the ball from his mates and playing it wide to the other forwards, Sam liked to do things differently. Strong and fast, he loved to take opposition defences by surprise, using his fancy dribbling skills as well as his muscle to attack directly. He was often criticised in the press:

“Kennedy is a clever, able, player, but really he tries too much. A little less dribbling and trying to beat the defence single handed would result in greater efficiency all round, and more goals to the club.” (Daily Record)

But he was efficient, scoring eleven goals in 18 league games in 1902-03. Would he change to suit the whims of the press?

He didn’t; Thistle’s wide men were happy for Sam’s characteristic rushing game to continue, and results and Division One positions continued to improve – seventh in 1903-04, sixth in 1904-05, and fifth in 1905-06, two points off third, with Sam captaining the team.

The SFA selectors were happy, too, and Sam was a surprise choice to lead the line for Scotland against Wales at Wrexham in 1905. Representative honours didn’t come regularly to Sam – his other ‘cap’ was alongside his Division One peers against a Division Two select in 1907.

Sam found his position in the forward line at Firhill regularly under threat as the club tried to persuade Sam to change his style, or be dropped. And he was dropped, regularly, but always came back between 1906 and 1909 to make the jersey his again.

Whether it was the trend for more inclusive centre-forwards, or age catching up, things were tough for Sam. No matter how resolute he was, the criticism from press and supporters must have been difficult to take. In 1908-09, when Thistle were homeless and waiting for Firhill to be built, the Daily Record reported on some Thistle fans who felt that the club would be unlucky for as long as Sam was playing at centre. Ironically the Record felt that Sam was the best of the Thistle forwards in a difficult season.

As Thistle moved into Firhill, the curtain fell on Sam’s Partick Thistle career. He was replaced by Sid Smith, one of a number of signings from England, after an early season injury, and this time Sam couldn’t bounce back. In October 1910 Sam returned to his first love – Girvan – where he continued to play, and keep an interested eye on Firhill. For years it was felt that Thistle had never adequately replaced Sam Kennedy.

At the start of his first season Kennedy was regularly identified as one of the main reasons for Thistle’s impressive early season form, becoming known for his “battering ram bursts” through opposition defences and his combination with Robert Gray who was responsible for the passes that allowed Sam to terrorise opposition defences.