Robert Campbell won an FA Cup winners medal while with Bradford City in 1911. 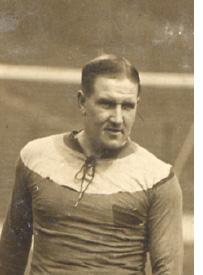 Made his debut for Thistle against Hibs in December 1898, replacing the regular left back Andrew Wilson, who was injured, before replacing James Auchencloss at right back when Wilson returned. He made a good impression in his first season:

“A stout defender is Campbell, who took Wilson’s place at left-back in the PT team. No doubt he is a rusher, but he came off on Saturday anyhow, and burst up the Hibs forwards repeatedly.” [Daily Record 12/12/1898]

“Campbell was somewhat erratic, but shone out brilliantly at times.” [Daily Record 19/12/1898]

… his young partner, Campbell, while keeping up the dash he has displayed all along, has added much to the resourceful side of his play. [Daily Record 25/12/1899]

“Robert Campbell had been the outstanding Thistle defender, despite playing out of position at right half.” [August 1900]

“Wilson and Campbell were knows as the old reliables. Howden, Wilson, Campbell and Harvey were the rock that Thistle would build on for the next few years.” [February 1902]

Campbell had been interesting Middlesbrough in the close season in 1902.

“Campbell, not only on account of his fine kicking and fearless tackling, was liked for the cheerful way he went about his work.” [November 1902]

After leaving Meadowside he signed for Rangers to replace Nicol Smith (who had died tragically) making nine appearances and scoring once before he moved to England and Millwall Athletic in the Southern League in 1905. He spent one season at Millwall, playing 28 games before moving to Division Two side Bradford City. He partnered Fred Farren in the City full back line, helping the club to win the Division Two title in 1907–08 and then the FA Cup in 1911. He played a total of 223 league games and 24 FA Cup games for City before retiring after football in England was suspended because of the First World War.

He was also a keen angler and cricketer with the Clydesdale Cricket Club. He died on 13 March 1931 in Ayr Hospital aged 49.

“Renowned for his hefty clearances, the popular full-back was one of the stars of the FA Cup triumph. On a tour of Belgium, the locals nicknamed him L’Aime, due to the fact he rarely had a smile off his face.” [bantamspast.co.uk]