John Boag was one of the pioneers of football in Partick, having been a player and secretary with the Partick FC club who played at Inchview in the late 1870s and early 1880s until they folded at the end of the 1884-85 season.

John played in several of the series of matches that Partick played in Lancashire and this led to his meeting his wife Eliza, a Bolton girl.

When the Partick FC club ended Boag immediately threw his hand in with Partick Thistle, who had developed into the top team in the burgh, and he soon became President of the club and remained involved until 1891.

The turn of the century saw Boag return to Glasgow after spending some time in India in an attempt to improve his health.

John died in Glasgow in 1910 and the Athletic News published an obituary. Unfortunately the author gets some of his facts wrong and references to Partick Thistle should actually be to Partick FC. 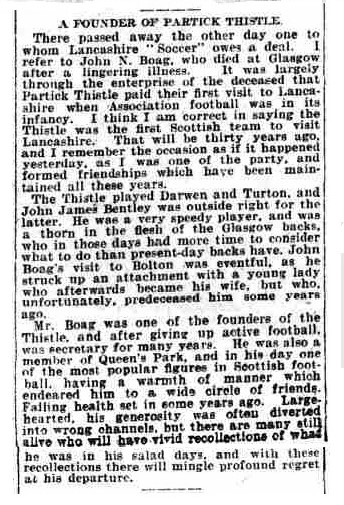 Thanks to Stuart Deans for providing the obituary. His Partick Thistle website is well worth a visit.

You can read more about Partick’s visits to Lancashire, and how these games led to widespread professionalism in English football, at the Scottish Sport History website.