Thistle signed Carrick Hamilton from Queen’s Park during the close season of 1905. Carrick played regularly over season 1905-06 before returning to Hampden the following summer.

In 1905 the Glasgow Evening News published a series of profiles of prominent Scottish players, including Carrick. 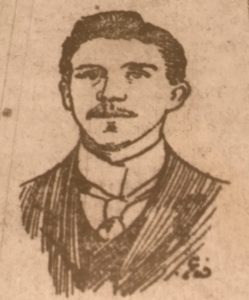 The Partick Thistle directors have frequently been fortunate in securing the services of capable amateurs to assist them, and on these occasions have invariably adopted the wise policy of at least giving them a fair trial. It is questionable, however, if ever they made a better deal in this direction than when they secured the services of Carrick Hamilton, who since the season opened has occupied the outside right position for them, and that most successfully.

An Ayrshire lad, being a native of Stevenston, he first came into prominence in the local team, Ardeer Thistle. He afterwards was induced to come to Petershill, but only played two matches for that club, when Queen’s Park took him to Hampden. There he played with the first eleven and afterwards with the Strollers.

At the beginning of the current season he went to Partick, and in the League eleven has played most consistently since the season opened, having only missed one game, and that at Dundee when business prevented him from doing the journey. Hamilton is a speedy dribbler, and shoots strongly and accurately, an evidence of the force which is behind his shots being given at Airdrie last week, when in saving from him, the home goalkeeper had his hand severely injured. Hamilton’s modent disposition, combined with his clever play, has already made him a favourite at Meadowside.

Thanks to Stuart Deans for statistics information. http://partickthistleahistory.wikifoundry.com/