At the age of 17 W.W. (William) Tennent signed for Partick Thistle in 1904. William was still a schoolboy, receiving his education at Glasgow High School, when he joined the club in 1904, but he soon became a regular in the first team, playing across the forward line, for a period of three months as the team won eight games in succession. He played eleven times for Thistle, scoring no goals.

As an amateur his natural club was Queen’s Park, and at the end of the season he moved to Hampden, where he played regularly for ten years.

It seems likely, but there is no proof, that William was a relation of Anderson Tennent, who moved from Hampden to Meadowside during the close season of 1905. 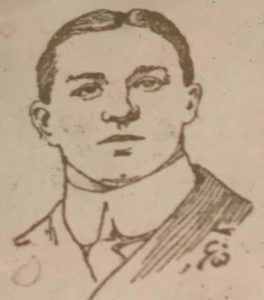 While Queen’s Park within recent years have met with many adversities and many disappointments as regards players – and this season is no exception – still there are always incidents cropping up to show that the time is not yet when there will be a lack of amateur talent to fill the positions of those who leave either to join the professional ranks or for other reasons.

A notable instance of this has been lately seen when that member of a well-known sport-loving family, Mr W.W. Tennent, has offered his services to the Hampden Club.

Mr Tennent is well known as a West of Scotland cricketer, where his father before him (Mr Hugh Tennent) also wielded the willow and is president of the club.

The player in question last season played as an amateur for Partick Thistle, and on the occasions on which he appeared on the extreme left wing he gave promise of yet developing into a clever player. On Hampden this season – the home of amateurism – he should do even better, and may yet in football fame equal the deeds  of his famous predecessors in the position.

One Response to William Tennent