The football season was gradually moving away from a series of friendly matches. The previous season saw Partick Thistle play in the Scottish and English FA tournaments, and the start of the 1886-87 season saw a meeting of the Glasgow FA suggest that a competition be started for members. As it transpired, the competition did not start until the following season, although the foray into the English Cup this season was more fruitful than the previous one. The Scottish Cup draw had been made prior to the start of the season, and it paired Thistle yet again with Queen’s Park, who had eliminated Thistle from the English Cup the previous season.

The season started with a 4-0 win over Cowlairs and a 1-0 win over Vale of Leven, both at Inchview, and a 3-0 win over Abercorn. The players that played the first few games were much the same as ended the season, although J.W.Holm of Queen’s Park played against Abercorn, while Willie Paul again appeared in the team after some time missing.

Further signs of the growth of the club were evident at Inchview, when a youth side played a game against their opposite numbers from Abercorn.

Willie Paul made his first appearance in a competitive game for Partick Thistle – in the Scottish Cup tie against Queen’s Park, as did J.W.Holm, but this was not enough to record a victory over Queen’s Park. Thistle opened the scoring after ten minutes, and John Marshall scored a second. Andrew Duff made a bad mistake to allow a soft shot run past him to take Queens into the lead, where they stayed to win 3-2 and dump Partick Thistle out of another competition. The home support came in for some criticism for “the selection of epithets they employed towards the Queen’s Park”. It was an indication of how far the club had come that there was widespread disappointment felt at Inchview at the defeat.

A home game against Port Glasgow Athletic started badly, the following week. The visitors started well and led 3-0 at half-time. Following the break Jerry Suter scored three and Johnstone scored once to win the game 4-3.

Willie Paul continued his halfback role against Cambuslang, and he scored Thistle’s goal in a 1-3 defeat which prompted the Scottish Athletic Journal to report “Partick Thistle are a strange lot of players, and not to be relied upon for any length of time.”

The club’s first competitive match with a club outside Scotland was fixed for the end of the month of October – the English Cup tie with old rivals Blackburn Olympic, and Thistle warmed up with a mixture of results. A 6-4 win over Battlefield, with Suter, McLucas and Paul scoring, was followed by a 2-3 defeat by Morton at Inchview. A weak Thistle team conceded three goals in the first half, and began a fightback with eight minutes remaining. McLucas and Suter scored before a third was scored. This prompted a dispute by Morton which caused Thistle to waive their claim on the goal. The game finished 3-2 to Morton. The following week saw goals from Johnstone and Paul see of a spirited Airdrie side to win 2-0.

Prior to the match against Blackburn Olympic a Thistle stalwart Robert Brown, who had played throughout the 1880’s, was presented with a watch as a mark of esteem by the club. The Athletic News’ Scottish correspondent Jonathan Oldbuck rated Thistle’s chances highly – reckoning the team were currently one of the best of several very good teams in Scotland. The players left Glasgow by train at 5pm on Friday, not arriving in Blackburn until 3.30am on the day of the game. The Blackburn Standard reported that “A few Scotchmen accompanied their team and their enthusiasm soon made their presence manifest. On every conceivable occasion they applauded the merits of their favourites, who must have been greatly encouraged by their shouts.”

It seems likely that Thistle would also  have been supported from the sidelines by forward Jerry Suter’s brother Fergie, who was playing for Blackburn Rovers at the time. Fergie had played for Partick FC in the 1870s before becoming one of the first professional footballers in England in a time when the practice of paying footballers was not allowed.

Thistle’s first English Cup victory was achieved at the Hole i’ th’ Wall ground in Blackburn thanks to goals from the prolific pair Paul and Johnstone. Towards the game Thistle scored two more, but both were disallowed.  Thistle’s strong six man forward line (English teams conventionally lined up with five forwards) was too much for the home team (Thistle players were described as being “burly”) and they won 3-1. Olympic had much of the game but were unable to create many chances, and those they did were repelled by Duff, Hendry and McLean. Euphoria surrounded Partick following the win. A spokesman was disappointed that there was to be no Glasgow Exhibition “as they had intended displaying the English Cup”! Manchester newspaper Cricket and Football Field reported on the game in an idiosyncratic manner.

A little too much euphoria, perhaps, as Thistle lost the following games at home to Dumbarton Athletic 1-0, and away to Dumbarton 1-2.

The FA Cup draw presented treasurer McQuarrie with relief. The trip to Blackburn had lost the club money, but the second round draw gave Partick Thistle a home match with Fleetwood Rangers – a young and inexperienced side that Thistle were expected to beat.
The game remained even only for the first ten minutes before Willie Paul lead his forwards on a goalscoring spree against the visitors. The final score ended 7-0, and Thistle could have scored more but opted not to embarrass the visitors further. After the game an un-named played gave his thoughts on the opponents: “The Fleetwood Rangers are a most gentlemanly set 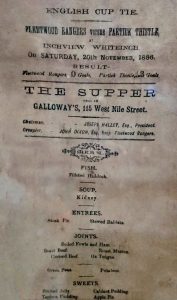 of fellows, and play a very good game, though in the niceties of the science they are a little deficient”. After the game the players and officials met at Galloways in West Nile Street for dinner.

Yet another defeat at the hands of Queen’s Park (1-4) separated English Cup ties – the third round match being a visit to Belfast to play the “Ulster cracks” Cliftonville (who had lost 1-4 to Rangers the week before).

A crowd of around 3,000 attended, a big one for Irish football. The Belfast Newsletter described it as “an immense concourse of people.” The home side had much of the play in the first half, although Partick Thistle led 3-0 at the break. In the second half Thistle dominated – Willie Paul scored five and Jerry Suter three. Cliftonville scored when Andrew Duff left his goal towards the end of the game, tired of having nothing to do. The final score was 11-1.

Shortly before the game in Belfast Hendry and Johnston were selected for a Glasgow select that played London at Hampden. The game ended 2-2.

John Marshall was forced to retire due to illness.

For the second year in a row Thistle travelled south at New Year to play Everton at Anfield, minus their professional players. Johnstone scored for Partick Thistle in an exciting 1-1 draw which Thistle had dominated in the early stages, prior to moving on to beat South Shore 3-2 in Blackpool. A third game was played when friendships started in the FA Cup earlier in the season were revived at Fleetwood. Thistle won a much more even match 5-4.

Concerns were being expressed over the costs being incurred for travelling to the English Cup games. The fourth round game was against Old Westminster in London, again a long and expensive round trip. Rumours were rife in London that Partick Thistle would scratch, but were advised by

London reporters that Old Westminsters were the weakest side left in the cup. Old Westminsters wanted to play the game at Leyton, but Partick Thistle insisted that it should be played at the prestigious Kennington Oval to allow for a bigger crowd and a bigger share of the receipts for the visiting club. The London club agreed, and Thistle were seen as the favourites.

The match at the Oval was very fast, with both defences playing well. With scheduled extra time approaching, and darkness which would make the extra time impossible, a late goal beat Partick Thistle 0-1 in the game refereed by Major Marindin, the President of the English FA. The players looked tired by the end of the game, their exertations not matched by a good result. The attendance was around 3,000 but Thistle’s share of the gate did not cover the travelling expenses. Rangers were left as Scotland’s sole representatives in the English competition. 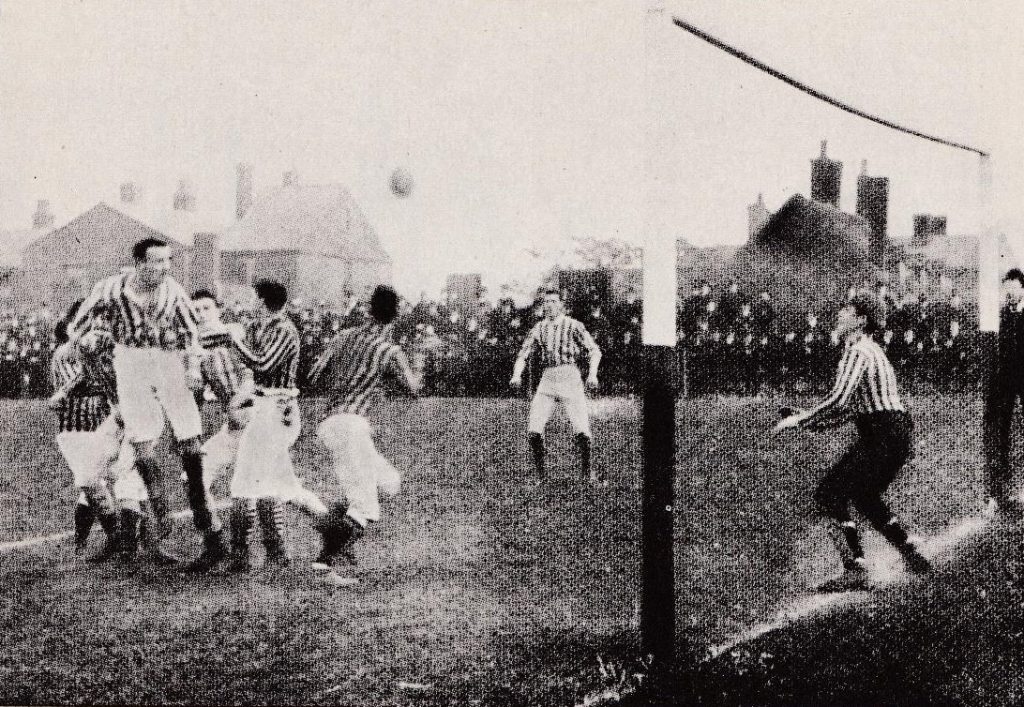 Action from the 1887 FA Cup Final, also played at the Oval, between Aston Villa and West Brom.

The impressive run in the English Cup had been noticed by the Glasgow FA selectors, and Jerry Suter and Robert Robertson played for Glasgow against Sheffield at the start of February. Glasgow won 10-3.

The good results continued, and a poor St Mirren team were beaten 8-0 at Inchview, a 1-1 draw with Cambuslang, and a 3-2 win over Airdrie.

Jerry Suter again represented his city, and scored once in a game against Edinburgh.

The start of March saw a 3-2 defeat by Abercorn, an 11-1 win over Clyde on two inches of snow, a 4-2 victory over Thornliebank (with Paul and Robertson scoring) and a 1-0 defeat by Port Glasgow Athletic. Thistle were four men short against Port Glasgow, who loaned four reserves who played well in an even game.

A rough and rowdy game followed at the start of April against Cowlairs at Inchview. The visitors opened the scoring before Robertson, Hendry and Marshall made the score 3-1. In the second half the game became rough, and when Bishop of Cowlairs was fouled in front of the enclosure, the crowd invaded the park and the game ended three minutes early.

The Glasgow FA Cup had been approved earlier in the season, but had not been organised, so Thistle accepted an invitation to take part in the Greenock Charity Cup. Greenock Rangers were beaten 7-1 at Cappielow in the first round.

Old rivals Glasgow Thistle were beaten 3-1 at Beechwood, before a 1-1 draw with Rangers at Inchview. Flannelly scored for Partick Thistle, having played earlier in the season in the Partick Junior Cup Final at Inchview. This was the second draw of the season between the two teams, and a decider was hastily arranged for the following week at Hampden.

The first half was even until Partick Thistle scored two through Marshall and Johnstone. Rangers scored one in reply but Thistle were the team full of enthusiasm and will to win. Suter (2) and Marshall again scored to win 5-1 to the delight of the supporters and committee.

As the season came to an end a 2-4 defeat to Port Glasgow Athletic and a 5-3 win over Church were recorded before 1st RRV were beaten 4-2 in the Greenock Charity semi-final. Morton triumphed 5-2 over Thistle in the final.

At the Annual Meeting Josh Halley stepped down as President, alowing the ex-Partick man John Boag to take over. Reports said that “Boag is popular, and a good businessman, and will be able to conduct the affairs of Partick Thistle well.”

The following were elected: