What’s in the bag? The Umpire! Prominent footballers from 1890

The Scottish Referee previewed the match and gave details of the players. 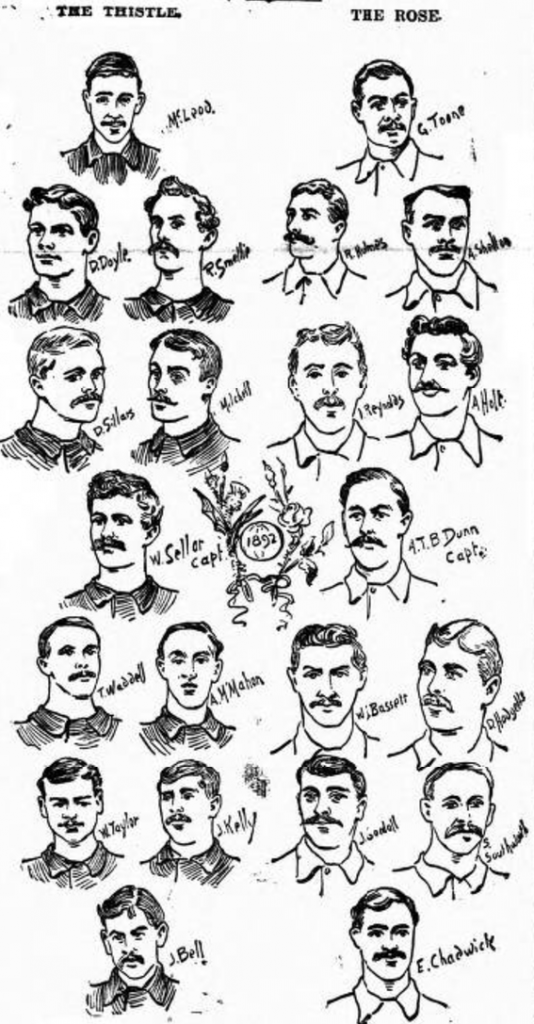 W. McLEOD (Dumbarton), Goal. A safe and reliable custodian, who has long done duty for the Sons of the Rock. His eye is always on the ball, and his feet and hands act in unison with his quick eyesight. He lacks the brilliancy of Macaulay, the prince of goalkeepers, but McLeod’s work can always be depended upon. He bears an historic name, and plays a noble game.

D. DOYLE (Celtic), Right Back. On this occasion daring Dan prefers the left, where he is invariably “right.” He is a shining League light, plays a gentlemanly game, and seldom has a foul given against him for questionable tactics. First cap.

R. SMELLIE, Left Back. The “irommaster” of the Queen’s — a resolute, hardy left back who knows his place, and keeps it, and his duty, and does it. Never says die, and has on more than one occasion been the salvation of the Spiders.

D. SILLARS, Right Half. Another Hampden hum, who, as busy as a bee, works for the honour of his team. and on Saturday will work sternly to regain old Scotland’s prestige. Possessed of more energy than resource, he is yet the very man to break up the speedy English vanguard. and may show them how Scotland can win.

J. KELLY, Centre Half. Scotland’s brightest gem, and lately one of the famous team who for some time possessed the proud title of “Champions of the World.” His over-head kicking, blocking, and tackling are superb, and he dearly loves a fleet dribble on his own account.

D. MITCHELL, Left half. A true blue, who is a credit to the Rangers and to the game. Slow, but sure; he never loses his confidence, but plays with that quiet determination and purpose which have won him his cap, an honour he well deserves and which he will not disgrace.

TAYLOR, Hearts. A graceful, wiry, outside right-winger, whose passing and shooting are up to first-class form, and whose consistent display all this season has well merited the distinction the Selecting Seven have conferred upon him. He is a true heart, and his battlecry is forward up victory.

D. WADDELL, Inside Right. Small, but clever. A cute dodger, passer, and dribbler, who smiles when heavy weights flounder in attempting to charge him.

J. BELL, Centre. A player whose excellence is due to his sterling capacity for hard work and stubborn resolution.

A. McMAHON, Inside Left. One of Scotland’s most brilliant dribblers and passers, and a dead shot.

W. SELLAR, Outside Left. A man who won his spurs long ago, and has never lost them. Always plays well against the English, and is determined to show his best form on this occasion.

J. TOONE (Goal). Notts. A brilliant goalkeeper, and a toonewhom the Scottish vanguard may find it bard to capture.

R. HOLMES, Left Back. Preston North End. A swanky, energetic player, with loads of pluck and plenty of dash, and adds the requisite amount of determination in tackling an opponent. By some he is judged as slow, and his style is now and again open to question.

A. T. B. DUNN (Captain), Right Back. Corinthians and Old Etonians. Of A. T. B. — the only amateur in the English team— “Pastime” says :— “Although a clever cricketer, and a regular player with the Eton Ramblers, a fairly good shot, and, in fact, a smart all round athlete, Dunn is best known as a footballer. From December 1878, until October 1881, he rarely touched a ball, but in the season 1881-82 he was called upon to help the Old Etonians, his first match being in a cup tie against the Clapham Rovers. Since 1881 Dunn has rarely missed an Old Etonian match. In 1882-83 and 1883-84 he played for Cambridge against Oxford. He was in the English team against Ireland in 1883, 1884, and 1887, and this year captained the England Eleven against Wales. A. T. B. Dunn is the only Englishman, except N. C. Bailey, who has played in International matches for a period of ten years. The former represented England in 1883, 1884, 1887, and 1892.”

REYNOLDS, Right Half, West Bromwich. A versatile player, who in his time has filled many parts. A grand tackler and blocker.

J. HOLT, Centre Half-back. Everton. Maybe a small man, but for his inches he is just a scorcher. Gets on the ball at every opportunity, tackles fearlessly and often, and keeps his forwards well supplied with work, and is credited with being able to see where he appears not to be looking. This is his second show against the Thistle, and, to the English team, will be worth more than his avoirdupois, unless he has changed mightily since last he wore football togs in the North.

C. SHELTON, Left Half. Notts. A strong, hardy chiel, who had at one time a rather unenviable reputation for play of a forcible kind. But that was some years ago, and he has toned down with years. Shelton has earned the character of being somewhat slow, but is a hard, steady worker, quick with his head, and has earned his place as an International player for the third year.

W. J. BASSETT, Outside Right. West Bromwich Albion. Is a good all-round man, and deserves his fourth cap. He is fast and tricky, given to heeling back, and apt to “puzzle the Quaker,” if he be unsophisticated a hit. A good dribble in, and not afraid to shoot for goal when half a chance presents itself.

J. GOODALL, Inside Right. Derby County. As an inside player, is equalled by few, surpassed by none, in either country. Full of resource and energy, and never likely to give in while there’s breath. Made a good name for himself on Hampden in 1888, and has had plenty of practice, working in concert with Bassett at the Oval and Blackburn during the seasons 1889-91, A splendid wing-feeder, and has a thorough knowledge of the game. A Scotsman born in England, of him it has been said, “England owes him a lot, and he owes Scotland more” and he’ll never be thoroughly happy till both are paid.

J. SOUTHWORTH, Centre. Blackburn Rovers. A splendid centre-forward, who looks well to his wing men, and is fond to see them engaged. He is usually a good shot at goal.

E. CHADWICK, Inside Left. Everton. An out-and-out specimen of what a player ought to be. Knows football, and plays it. A splendid dribbler, and a champion shot, there will require to be more than one eye on his movements. With Millward as partner, there was a strong aggressive pair on the left of tilt, English team last year. This year Chadwick has Hodgetts as his partner, and the danger will be none the less.

HODGETTS, Outside Left. Aston Villa. A strong sturdy player, who may fail to combine with Chadwick so effectively as Millward did, but Hodgetts is a strong dribbler and a capital shot at goal.