In October 1903 Partick Thistle, having had arguably the best start to a season in the club’s history, followed by a few poor results, looked to the transfer market to improve results. 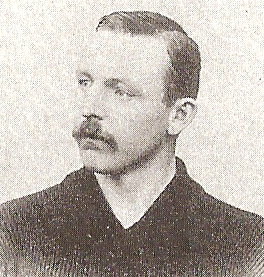 By far the highest profile signing at the time was Celtic great Alex ‘Sandy’ McMahon, and the experienced new arrival was seen as a big improvement to the young Thistle squad.

McMahon signed as a teenager for Hibernians and played for a few seasons before joining the recently formed Celtic in 1890.

Despite his phenomenal scoring record – top scorer in eight of his eleven full seasons – his career was blighted by knee and ankle injuries, and had it not been for those injuries, and the arrival of the next great Celtic goalscorer Jimmy Quinn, he might have added to his success at Parkhead.

He was called “the prince of dribblers”, and one particular report says that he played “arms held high, spread out like ostrich wings, head down, back slightly bent forward, enormous feet”.

Sandy played eleven games in, and then retired at the end of, the 1902-03 season but was tempted back to football by Partick Thistle.

The following week, however, McMahon’s non appearance (against Hearts) was only part of an afternoon of disappointments provided by Thistle, reported the Daily Record. No explanation was forthcoming, and he played the next two games – descriped as skilful but slow. However, over the next few weeks, despite being selected, match reports reported further McMahon non-appearances, and eventually the Thistle committee stopped picking him, settling on Sam Kennedy as their preferred centre forward.

The mystery of his non-appearances was unexplained by the newspapers but it can be assumed that the injury problems that cut his Celtic career short were preventing him from turning out for Thistle.

Sandy remained with Thistle, and made five appearances, until the end of the season, when he retired from playing football again.

A few years later Sandy owned a pub called ‘The Duke’ in Great Eastern Road (now the Gallowgate). The Duke was one of his nicknames, derived from the French President Patrice de Mac-Mahon, duc de Magenta. Jimmy McMenemy later owned the same pub.