Between 1888 and 1892 John McCorkindale played 129 times in goal for Partick Thistle and after retiring from playing he became a referee. This story, from the Scottish Weekly Record on 5 December 1905, tells the frightening story of how McCorkindale was attacked after a Morton v Rangers match. 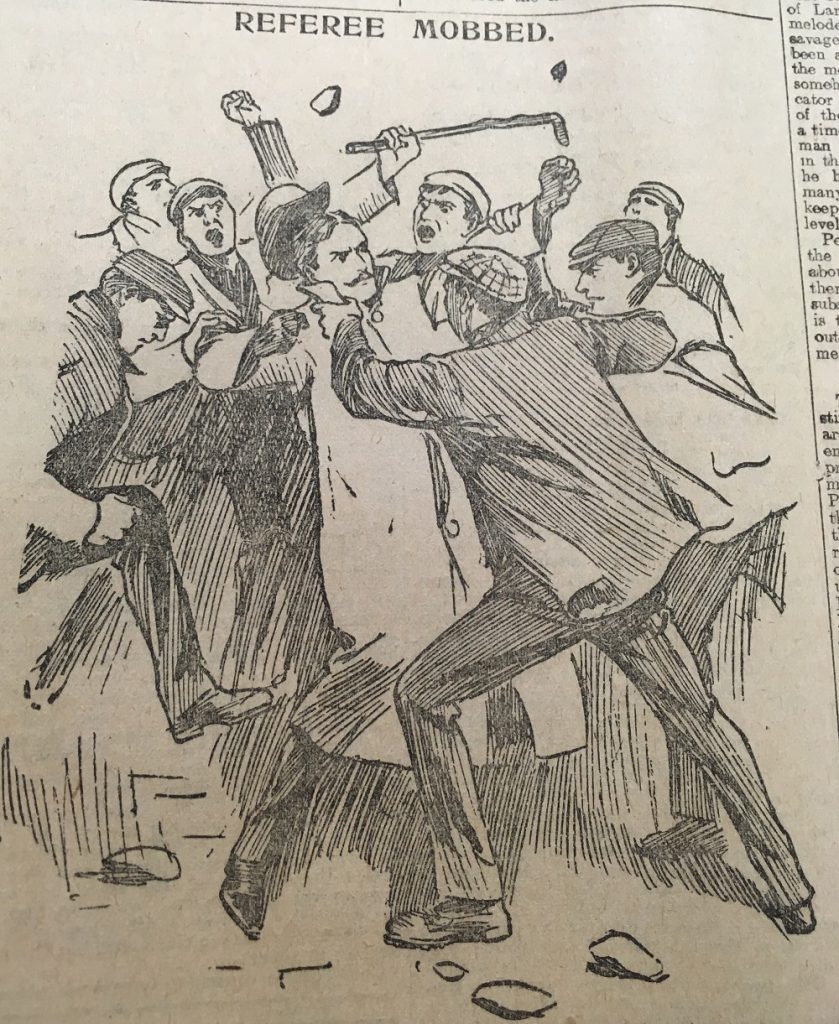 Mr. McCorkindade, of Dalmuir, who refereed the League match at Greenock on Saturday between Rangers and Morton was savagely attacked on his way to Cartsdyke Station by a mob of youths.

Towards the close of the game, which had aroused great interest locally on account of the recent Rangers’ defeat by the home club, feeling ran high, and the disallowing by the referee of a goal scored for Morton, with the late ordering of Eadie, one of the half-backs, from tho field, served to bring matters to a crisis. Fears, indeed, were entertained that the official would be mobbed on the call of time, but although a large section of the spectators rushed on to tho field at the close of the game, and hooted Mr. McCorkindale no actual violence was offered, and he gained the pavilion unmolested.

About half past four the referee left Cappielow for Cartsdyke Station, which is only a few hundred yards from the park. A large crowd, comprised almost entirely of young lads, it is said, catching sight of the referree began to hoot and indulge in threats. At Macdougall Street the crowd closed upon the the unhappy official and subjected him to shameful abuse.

In a fainting condition Mr. McCorkindale was assisted by four men, the mob in vain endeavouring to follow, and still indulging in opprobrious remarks. By direction of the stationmaster, Mr Anderson, the victim of the onslaught was taken into the waiting room, where one of the station officials and numerous sympathisers did what lay in their power to alleviate the poor referee’s sufferings.

The injuries, so far as could be learned, were confined to the body, and were mostly in the region of the ribs. Indeed, so badly had he been abused that breathing caused him considerable agony.

On the arrival of the train — a football special — which was to convey the Glasgow spectators to the, city, the injured referee was assisted from the waiting-room, and, with a few friends, was accompanied in a reserved first class compartment.

A salutary lesson has been taught the misguided football enthusiasts who mobbed the referee by the closing of Cappielow Park. the ground of the Morton FC for a period of one month, at the instance of the Scottish Football Association, who have at last awakened to the fact that this is the only way they can get at the rowdy element who interfere with club games and attack referees.