In October 1904 Andrew Smith was interviewed by the Scottish Weekly Record. Smith joined Thistle in 1880 and served as secretary and president before becoming a Thistle director.

The Sheriff Officer and the Thistle’s Water Bill 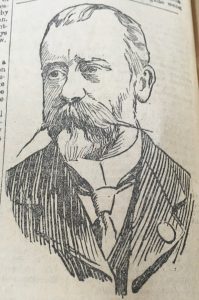 While the majority of the pioneers of club football in the Glasgow district have long relinquished official connection with the game, Mr Andrew Martin Smith, of the Partick Thistle FC, still maintains an active and enthusiastic interest in the affairs of the club. He has the history of Partick football at his finger tips, and he is one of the few who helped raise the club to the position it occupies today by much self-sacrifice and industry.

All his life “A.M.,” as he is familiarly known, has been a busy and a popular man. He has the gift of organisation in a marked degree, and many local institutions claim his attention.

As a member of the craft for about 30 years he is well known in Masonic circles as he is among footballers. For five years he was Master of St John’s Lodge, Whiteinch and 12 years an office-bearer of the Provincial Grand Lodge of Glasgow. He rose to the highest elective rank, that of Provincial Grand Senior Warden. Mr Smith is also a member of the Grand Lodge of Scotland, and represents, as Proxy-Master, a lodge in Johannesburg, in which far-off clime two members of his family reside.

“I was first attracted to football,” remarked Mr Smith, when giving a few impressions to the Weekly Record interviewer, “at the time Queen’s Park played at the Queen’s Park recreation ground, opposite the Deaf and Dumb Institution. The late Joseph Taylor, Charles Campbell, Harry McNeil, W. McKinnon and others of the old and famous brigade were playimg at the time. I used to watch their practice games. As a youth I played football on Glasgow Green, where the Rangers sprung from, in the days of the Vallances and McNeils. Later on I took part in the annual charity games organised by the Thistle officials for behoof of the Whiteinch Orphan Homes. Mr J.K. McDowall, the SFA secretary, used to lend a helping hand in the same cause, and some of us have cause to remember his back play alongside Niven, of Moffat.

“I was born in the Kinning Park district and settled in Partick 25 years ago. A year later I joined Partick Thistle when the club played at Jordanvale, and I have been a loyal supporter of the ‘Jags’ ever since. From there the Thistle migrated to Muir Park, but after the lapse of three years we had to look out for a new ground. If football had been as well supported then as it is know I often think what a splendid investment the purchase of Muir Park would have been to the club. It was sold at an exceptionally low figure for building purposes.

“We experienced considerable trouble in getting a pitch convenient to the burgh, but the demise of the old Partick FC – for long our deadly rivals – took us out of a dilemma. We took over their enclosure at Inchview with all the appurtenances.

“After a tenure of seven years at Inchview the building fiend again compelled us to seek other quarters. We settled upon Meadowside, nd there we have remained. It is the best equipped athletic enclosure the Thistle have had, and with its railway, car and cross-river communication, the most accessible of any leading football ground in the city.  I have been in office ever since, and have been in succession honorary secretary, match secretary, and president, and now a member of committee.

“Can you recall any special events in connection with those early Thistle days?”

“There is one which is indelibly impressed on my memory. The club has often been in low water. During one of those periodic times of financial impecuniosity a Sherrif Officer stepped into my house one day and arrested part of my furniture because the club’s water bill was unpaid. I laugh now every time I think of it, although I took it rather seriously at the time.

“I remember we once had a match on in Edinburgh. Bobbie Brown was captain at the time. At the last moment Andrew Duff, the goalkeeper, disappointed us, and we had to hurry off to secure a substitute. We managed to get a hold of Burns, of the St Peter’s FC, whom we had to take away from his work. As we were speeding along the streets, carrying a pair of football boots, we found that we must take a cab, otherwise we would lose the train.

“As we entered the vehicle, the cabbie, mistaking me for an officer of the law, remarked, ‘What’s he done?’ at the same time pointing at Burns. ‘Nothing yet,’ I replied, ‘but we hope he will do something good when he goes to Edinburgh.’

“He did, for he won the match for us against the Hearts.

“Partick Thistle has turned out a lot of first class players. Among the older hands one may rank among the best such men as Andrew Duff, R. Brown, Jerry Suter, R. Robertson, J. Beattie, J. Hendry, W. Paul and R. Marshall.”

“How do you regard the immediate prospects of the club?”

“We have had a bit of bad luck this season, but we hope in time to improve and to gain as many points in the League as we finished with last year. Strict training is to be entered upon, and I am certain the members of the team will respond to the call of the directors.”