Buffalo Bill visits Glasgow, and goes to the football 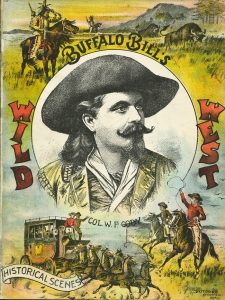 Buffalo Bill Cody was a famous character in the ‘wild west’ of America in the 19th century. After a career supplying railroad workers with bison meat he began to perform in stage shows until he founded Buffalo Bill’s Wild West, a circus-like attraction that toured annually.

Cody brought the show to Europe four times between 1887 and 1892, and visited Glasgow in 1891 for almost four months where his company performed nightly at the East End Exhibition Buildings in Dennistoun. The cowboys and Indians were easily recognisable on the streets of Glasgow.

Bill attended a match between Rangers and Queen’s Park at Ibrox in November 1891 which ended in a 3-0 victory in favour of Queen’s Park.

The Scottish Referee newspaper marked the occasion with a poem.

I’m Buffalo Bill from ‘cross the sea,
I guess this game’s quite new to me:
I fancy the boys that’s dressed in blue
Will give the other side their cue.

I hope the better team will win,
But, snakes alive, I can’t but grin
To see the players jump about:
I’d like my “bucks” to have a shout.

I guess thar’s sumthing in this game,
When such a crowd looks at the same;
I hope you all will see my show,
For I have been at yours, you know.