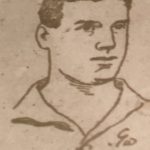 Andrew Swan joined Thistle in the summer of 1905, having spent time playing a handful of games Tottenham Hotspur in the Southern League. Born in Dalbeattie he had played junior football for clubs in Partick before moving south  to Lincoln in 1898. After a season with Lincoln he played for a number of clubs in England, most notably Arsenal, before returning for a couple of seasons with St Mirren.

After his spell at Meadowside he moved back to England and played for a number of clubs.

In 1905 the Glasgow Evening News published a series of profiles of prominent Scottish players, including Swan.

Popularly known as Andy, this player is perhaps the most notable addition to the Partick Thistle team this season, and occupies the inside forward positions.

Swan is a South of Scotland footballer, being a native of Dalbeattie, where he learned his football in a junior team, and afterwards played for the 6th G.R.V. His qualities as a player early attracted the English agents, and he was induced to cross the border, where he saw service in the south with New Brompton and Barnsley. In season 1902 we was induced to come to Paisley, where in the St Mirren eleven he did excellent work at inside-right, centre-forward, and inside-left. Swan is a close dribbler and if he has a fault it is that he is inclined to play too closely.

His idea of the inside game, however, is well-night perfect, and he never parts with a ball injudiciously. Last season he played for Tottenham Hotspur.

Much is expected of him at Meadowside – where he fills the position vacated by Wilkie – and the Partick officials are not likely to be disappointed. Swan made his debut for his new club in the Rangers five-a-side tourney.

Thanks to Stuart Deans for statistics information. http://partickthistleahistory.wikifoundry.com/

Swan is listed in several Who’s Who books as playing for Plymouth in 1906-07. However, in the regard he was mixed up with Herbert Swann. See this link: http://www.greensonscreen.co.uk/gosdb-players2.asp?pid=805&scp=1,2,3,4,5,6,7. Thanks to Ian Nannestad for this information.