Though a comparatively young man, Mr Ward – he is only 29 years of age – has played a strenuous and honourable part in football life. 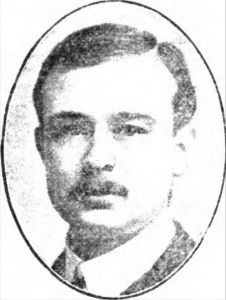 He is one of three brothers who have been assiduous in well-doing. George, who met with a tragic death some years ago while on a visit to London to witness the international match between England and Scotland, was one of the smartest 230 yards amateurs in the eighties, and some of his races with T.Blair, A.S.Blair, M.C.Wright and others are stuff among the most cherished recollections of the writer of this sketch. Another brother, James, was likewise a prominent athlete in his day; he was perhaps more versatile than George, being efficient alike in jumping, running, and other forms of athletic exercise. If not so keen as he was, James  is always to be seen at any first-class sporting function, and we understand that the Partick Thistle has in Jim one of its most generous supporters.

William has never courted game on the path, though had he done so he might easily have achieved as much distinction as either of his brothers, as in build and agility he has what is essential to success in so-called athletics. Football has always been his hobby, first as player, now as administrator. We believe he was first of all connected with the Minerva, which was a very prominent junior club some years ago. Like others, however, it is a thing of the past, but its achievements are still spoken of with pride by those who were in any way associated with it. Along with other Minerva members, Mr Ward joined the Queen’s Park, whose amateur principles were in consonance with his ideas of sport generally. This was in 1891. He played for the Strollers Eleven, doing good service for them as a wing forward and generally speaking, taking a keen and loyal interest in the club.

Eventually Mr Ward played for the Partick Thistle, being outside left to Ferguson, while W.Paul, than whom the Meadowside club never had a more distinguished player, was centre. It appears Mr Ward has been a member of the Thistle for twenty years, and during that long period he has seen many vicissitudes, all of which, however, have been surmounted, and we say that no one has done more to place the Thistle on a sound and progressive footing than the subject of this sketch. As a proof of the hold he had, and still has, on the membership of that club, we may mention that he was elected president some years ago without serving as a preliminary on the committee. In 1900 Mr Ward was elected as a member of the Scottish Football Association, and for two seasons he has been part of the selecting committee, which is regarded as a very considerable honour. Mr Ward has represented the Thistle on the Scottish League Committee for four years and the Glasgow Football Association has also profited to his experience and cool judgement.

There follows a few more sentences which are unfortunately inelligible and cannot be re-published here.