In some previous years the Partick Thistle officials have had many anxious moments about retaining their place in the First Division, but all that seems to be a thing of the past. The figures put up by them last season in the league competition points to their having got beyond the doubtful stage, and in this connection no other club has had a more varied career.

First promoted in 1897, when they entered into occupancy of Meadowside Park they have since then been twice relegated to the lower division but only remained there one season on each occasion, having by consistent play earned well merited promotions. They now enter upon their third successive year in the ‘upper circle’ of football, and, as their score of 27 points last season was the best in their history, they now look upon their place there as a permanency. Gratifying as this is, the officials are hopeful of achieving better results in the season about to be entered on.

They come to the scratch again with their affairs in the most promising condition and a team equal to any yet brought forward together. It may at once be said that there will be a good few changes, and, while no sensational captures are to be chronicled, care has been taken in selecting suitable men for the vacancies. After the departure of Leiper for Motherwell, the want of a reserve back was severely felt, and in addition to Campbell and Wilson, Gilligan (Dundee Wanderers) has been secured. Gilligan is a clever player, with youth on his side, and good judges predict for him a brilliant career. At half back the only newcomer is Melville (East Fife) and if he plays up to his trial games his place in the team is assured. Coming to the forwards, it is here that most of the planning and fixing will have to be done, for no fewer than four new men have already been secured. The new centre forward, McIlvenny (Hamilton Academicals) is a most artistic player and a prolific goalscorer. He will have a capital understudy in Reid, a promising junior from Dundee Abbot. For the left wing a rattling good pair has been secured in Drummond (Manchester City) and Curran (Hamilton).

Crawford has retired from the game, and the directors hope to sign on a well-known junior outside right when the season opens. The following is the list of professionals signed on up to date:- Goal, Wilkie and Howden; Backs Campbell, A.Wilson, Gilligan; Half backs Harvey, Walker, H.Wilson, W.Gray and Melville; Forwards Proudfoot, Massie, R.Gray, McIlvenny, Drummond, Curran, Reid.

In addition, the club will have the assistance of amateurs John Gillespie, A. McE. Swan, and W. Hamilton who will be at hand when their services are required. Training has been going on since 26th July, the committee recognising that timely preparation is essential in competitive football. Mr John Nott again acts as trainer, and Mr John McLay (late of Minerva) has been appointed assistant.

The playing pitch has been nursed as if it was a bowling green, and in accordance with the League mandate 13 turnstiles will be in operation at the entrances by the opening day.

The officials are practically the same as last season, and this ensures enterprise, without which no organisation can succeed. Under limited liability, the financial results were not so satisfactory as the general play of the team warranted, but this is accounted for by being dropped in the first round of the Sottish tie, and a like catastrophe is not being reckoned on. Everything considered, the Thistle are well equipped for the work before them, and the management are determined to make the old club a power in present day football and worthy of the large constituency from which they derive their support. Port Glasgow Athletic open Meadowside on Wednesday, thereafter the serious work of the League begins with Celtic at Meadowside this day week. 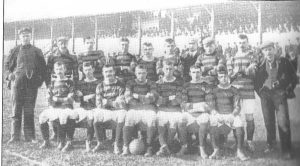