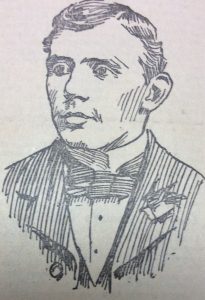 In 1903 Thistle goalkeeper Tom Wilkie was just one of two top class goalkeepers on the Partick Thistle books – the other being Willie Howden.

Tom played over 80 games for Thistle and would surely have played more had he not been on the books at the same time as Howden. He was involved in a match at Port Glasgow which ended in a pitch invasion which has been fictionalised in the short story ‘The Partick Thistle goalie and the Port Glasgow hooligans.’

Tom met with a Weekly Record reporter in 1903 to talk about his career.

The goalkeeper plays such an important part in the game that it is a mater of congratulation that all the League clubs in Scotland are served by players in a class that bear favourable comparison with any year in the history of the game. Among those who have kept to the fore for a longer term of years than the majority is Tom Wilkie of Partick Thistle. Over seven years of first-class football he has figured prominently in Glasgow, Edinburgh, Preston, and Partick, and has nothing to learn in the art of defeating the tricks of the forwards.

The son of a big carting contractor in the East-End of Glasgow, the Thistle representative is generously endowed with Nature’s gifts to man. He stands 5ft 10ins, and takes the scale at 12st., so that he takes some shifting on a scrimmage.

Mr Tom is the humorist of he Meadowside team, a right good-hearted fellow, and a favourite of the crowd. In early life his humour was revealed in the tricks he exhibited between the uprights, but League football taught him that what was applauded by the junior crowd was much too risky to continue in senior life, so he wisely settled to the more exacting etiquette of senior football.

“You ask my most remarkable experience in football?” said the Meadowside goalkeeper. “Well, I shall never forget the fate that befell a Scottish League team in Belfast in 1899. Our side included H.Allan (Hearts), Dan Doyle (Celtic), B.Battles (Celtic), A.Buick (Hearts), W.Nash (Celtic), R.Walker (Hearts), P.Somers (Celtic), W.Michael (Hearts), A.McMahon(Celtic), and J.Tennant (St Bernard). We scored about six goals and only got one, while Ireland got a couple that ought never to have counted. According to the referee the game ended 3-1 for Ireland, but had the result been reversed Scotland’s superiority on play would have only partly been represented. At the dinner in the evening when the toast of “The Referee” was proposed the whole of the Scottish players rose and left the room. Not a man amongst us repented of his action, so great was our indignation at the treatment we received on the field.”

Lancashire and Other Matches

“What ranks as the best match you have taken part in?”

“The most exciting game I ever played was for Preston North End against Bury at Deepdale. The pace was a scorcher all through, and we got the winning goal in the last minute of the game.”

“What do you think of the Partick Thistle team this season?”

“I consider this has been the best season they have had since I joined the club. Up until the Cathkin Cup tie the team were going champion, but they went all to pieces against the 3rd Lanark after losing a goal earlier in the game. Last Saturday the Thistle went great guns and did as they liked with Kilmarnock, who are a very moderate side this year. It was a positive treat to see John Wilkie and Kennedy on the run. I can’t understand how the Rangers let Wilkie go.”

“What is the best advice you can give a young goalkeeper?”

“Keep his temper, for one thing, and never mind the man. A goalkeeper who allows temper to get the better of him will let his side down badly.”

“What has been your most amusing experience on the football field?”

“A funny match at Inverness. The Thistle were touring the North at the New Year. After the League match at Dundee the players entered the fun of the holiday, and on the Monday we played a match at Aberdeen. By the time we reached the capital of the Highlands, serious football was out of the question. Or team was wonderfully arranged for the Clachnacuddin match. Haggarty and Kay, the two backs, were the left wing combination, Proudfoot, the half-back, was our centre forward, and R.Campbell was also in the front line. Tom Hyslop, our left winger droped into back, so as to get, as he thought, an easy job. Our ellows would have been chased out of Partick had the game been played at Meadowside. Ten minutes from time the Inverness team led us by 4-0, but the Thistle wakened up and rattled on three goals and just lost on the post by the odd goal. The ball in the evening was the best part of the proceedings. We have had no New Year trip since! The officials will tell you the reason why.”

“I started to play football in the Crown Athletic, a once well-known junior club in the South Side of Glasgow. Sandy Crawford, who is now with me in Partick, was a member of the Crown team then, and Garside of 3rd Lanark was another. The greatest match I ever played for the Athletic was the final of the North-Eastern Junior Cup. Parkhead were our opponents, and they left the field twenty minutes from time because the referee gave a goal against them which they considered ought not to have been allowed. The Crown were leading by 3 goals to 1 at the time. After all, we did not get the cup. Parkhead protested against one of our players, and beat us in the replay. The next season the player protested against played for Parkhead.

My next club was Glasgow Perthshire. I was only one season in that quarter. The Perthshire had a few excellent players, among them being Hosie, who went to Blackburn Rovers, Lennox, latterly of Newcastle United; Coleman, now of Maryhill; and Leyden, the clever young forward who attracted the attention of Blackburn Rovers. Leyden and I joined the Strathclyde together. That would be in the seaso of 1896-97. Strathclyde was the cock of the walk in junior circles at the time, and won the Scottish Junior Cup. In the final we had to play Dunfermline Juniors twice. We licked them at Celtic Park by 3 goals to 2, but they gained a protest, one of our players being ineligible. The game was ordered to be replayed in Edinburgh. Strathclyde once again whacked the Fifers by 2 goals to 0. Beside the Scottish Cup we won the Glasgow League championship that year. Two of our players – Raeside and Coulter – joined the Clyde afterwards, and Allison who was perhaps the best junior left-back in Scotland at the time, played for New Brighton, and is now doing well at Reading.

“My junior career terminated at Beechwood, and after leaving Strathclyde I made my debut as a senior player in the ranks of the Clyde. I did not remain long in that quarter, and six months later found me with St Bernard. I was three seasons in Edinburgh. The best team the Saints had during their Scottish League career was the first year. I was with them.

“After leaving St Bernard I did nothing for six months. Then Partick Thistle induced me to don the jersey and look out my old boots. My first match for the Thistle was four seasons back at Celtic Park against Celtic in a League match. The Thistle made a splendid show that ay. Big Tom Hyslop, the International forward, scored the equalising goal a few minute from time.

“When McBride, of Preston North End, got injured in the Anglo-Scots International trial match at Cathkin Park I went up to Preston and took his place. I played in the last four League matches. North End won three of the four and lost the last, but it did not matter much, as we would have required to have won by about 12 goals to 0 to have escaped from the bottom of the League.