In August 1902 Partick Thistle were ready to return to the First Division and face the top clubs in Scotland. The Evening Times and Daily Record previewed their chances.

There will not be many changes to last season, and no expensive transfer fees have been incurred, as was the case when last promoted, on which occasion £360 was expended on players, and with the biggest wages bill in the club’s history, nothing but disappointment and disgust, instead of success and satisfaction, rewarded the executive for their enterprise.

This year a quite different plan has been followed, and the committee has worked hard to get a strong team compatible with a due regard to economy. McAllister is a certain starter and he will have two capital understudies in Kennedy (Ayr) and Duncanson (Duntocher Hibs).

The playing pitch has received due attention, and the terracing on the south side of the enclosure has been largely increased.

New players include Gray of Everton –an old Partick favourite, who is expected to fill the inside left position; Kennedy, a centre forward from Ayr; Duncanson (Dumbarton Hibs), and Baird (Benburb) – both junior forwards of repute – and Polland, a young back from the Craigbank Thistle.

Of last season’s players Wilkie, Campbell, Wilson, Harvey, Gailey, Walker, Morton, Massie, Connor and Muirhead have been retained, while the following amateurs will be at the call of the club: A.McAllister, W.Lindsay, John Gillespie, William Howden, J.Spence, J.Law, and the veteran Willie Paul.

Sam Kennedy had signed from Ayr – The Times reckoned as an understudy to Alex McAllister who had filled the problem centre-forward position the previous season. It turned out that big Sam, reckoned to be the best centre in the Second Division started the season as first choice for the next seven years, playing more that 250 games for the club, latterly being regarded as one of the legends of the club’s early days.

Robert Gray had returned to Thistle, having left in 1899 for a career at Everton. He was to be an important part of the most successful Thistle team of all time (to date) over the following five years.

The £360 worth of transfer fees was the 2012 equivalent of £36,400 (thisismoney), showing that football hadn’t yet begun to rely on paying money to improve squads, although clearly players did change their clubs. 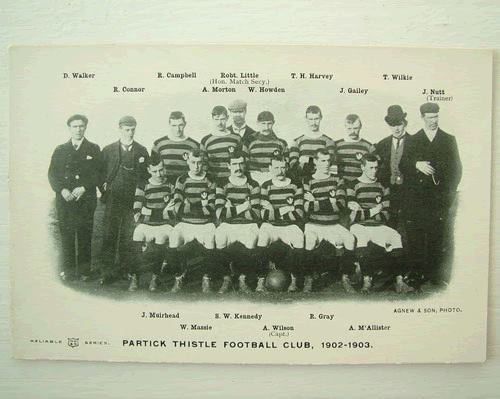